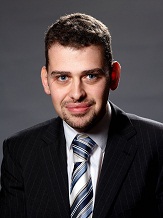 Kyrill Farbmann is an Associate at Jones Day specialising in Antitrust & Competition Law.

KF: I studied law in Germany and, after passing my State Exams (Staatsexam), was admitted to the German Bar.  I also completed a PhD in European Merger Control in Germany and an LLM in European Competition Law in the UK, where my Masters paper dealt with European state aid law.

In addition, in 2000 I worked as a “Stagiaire” at the European Parliament. You might say this was the period when my interest in European Law (and in Brussels) grew from fantasy to fact. As soon as I arrived in Brussels I knew somehow that Brussels was where I wanted to begin my career and that I would work hard to make that dream become reality. The MEP I worked for was a member of the Legal Affairs Committee, which dealt often with the European Merger Regulation. I found the legislative process as well as the legal issues raised very exciting.  Merger control, in particular, and EC Competition law, in general, deal not only with law, but also with economics and both are also deeply influenced by politics: all subjects that fascinate me!

In addition, Competition law is an area that requires working on an international scale. Having grown up in Russia and in Germany, I am accustomed to living in very different cultures. As a result I have always looked forward, in my professional life, to bridging the gap between law and culture, i.e. to working internationally.

So, as soon as I completed my studies, I was offered a position with the Brussels office of Latham & Watkins. Two years later I received an offer to join the Brussels office of Jones Day.   I remember my first interview with Jones Day, when I met my current mentor, Thomas Jestaedt, a very well-known (and well-liked) German qualified Competition partner.  During our first meeting, I realised immediately that not only could I learn a lot from Thomas, but also that we had an excellent personal contact. This has certainly proved to be the case!

BL: What is it like studying law in Germany?

KF: Interesting question: If I could, I would shorten the German legal educational system. The system prepares law students to become judges, more or less, and there are many things you need to learn by heart.  In my opinion, most of these are unnecessary realistically speaking. In addition, the German legal, educational system is a bit like a lottery in terms of the administration and grading of the “all important” state exams. I have seen many friends (who I think were smarter than I was) fail to achieve satisfactory results which, most unfortunately, severely limited their career prospects. I believe there are many skills that a good lawyer needs to possess. Passing exams should not be the only criteria for opportunities to practice law.

BL:  What kind of work do you carry out specifically at Jones Day?

KF: I do a lot of merger work.  I help companies to obtain clearance decisions.  I represent multinationals before the German Federal Cartel Office and the European Commission.  As a native Russian speaker, I regularly work with competition authorities in the Commonwealth of Independent States.  I have also worked for intervening parties and complainants in merger cases.

We often advise companies concerning the implications of the European and German antitrust laws for certain agreements and business practices. In the area of cartels I have worked on a broad range of questions, from the emergency response to dawn raids to representation of clients in all phases of an antitrust investigation and related litigation. We also advise on matters relating to the abuse of a dominant position and on different questions of staid aid.

In addition to antitrust and competition work, we also work in other legal fields. For example, I have recently advised  on matters relating to compliance with EU personal data, corporate corruption, bribery, trade with sanctioned countries (in particular the CIS states), as well as investigations issues under the United States Foreign Corrupt Practices Act (FCPA) and related US, European and Russian anti-corruption laws. Pro bono projects are also an integral part of what we do, and here we often work on human rights related cases.

BL: Could you give some examples of the kind of pro bono work you have done?

KF: Well, just recently we completed a project on judicial accountability for an authority in Kosovo.  Kosovo, a new state, is trying to improve their current system and to bring it up to a comparable level with other European judicial systems.  We worked on this project along with other Jones Day offices from all over the world.

We researched and drafted summaries relating to different countries’ judicial reforms or accountabilities, including some very developed countries as well as countries where judicial democratic reforms are more recent. I worked on Russia, specifically.  For example, in the former USSR, the issue of jurisdiction was not that well-developed, although in the last 20 years there has certainly been improvement.  In addition, there are still considerable problems with judicial independence (and bribery). I researched how the Russian government attempts to combat these problems and implement reforms. The President of the Russian Federation, Dmitri Medvedev, is a lawyer by profession so he is very fond of judicial reforms.

Once we completed the research, we provided consolidated information to the Kosovo authorities in order to allow them to implement the new information into their standards.

I enjoy pro bono projects and am always happy to do them.  I am grateful to Jones Day that they encourage their lawyers to work on these projects.

BL: What is a typical day of work for you?

KF: Well, there is no typical day really.  However, if there is nothing special on the agenda, like attending a conference, I start off my day by reviewing the press, reading articles and newspapers for things that might be of interest to my clients.  I keep up-to-date with political developments as well:  what’s going on in the Commission, the Parliament, and so on. We usually have internal and external meetings, tele-conferences, etc.  When Thomas, my boss, is away, which is quite often because he needs to travel for his work, I coordinate quite a lot of things in the office.

During lunchtime, I often do sports in our gym.  This is very important for me, especially if I work sitting all day.  The rest of the day is usually filled up with follow-up meetings, preparing for the next day and working on client files. Often, we’re at the Commission with clients, or we liaise with authorities.

BL: Do you think there is anything particular about practicing law in Brussels?

KF: Yes. I see a big difference when I compare practicing law in Brussels with my knowledge of practicing law in Germany and the experiences of friends who currently practice there.  You cannot compare our work with that of a German lawyer.  Here, there are so many different people and cultures to learn from and work with. In the Commission for example, you get to know people from 27 Member States. This alone makes people more adaptable to different cultures, which, in turn, creates a very special working environment.

BL: Would you ever want to work in the EU institutions?

KF: Yes, why not.  This is what I like about the US legal system.  There, people who work for the authorities have usually also had experience in private practice, and the reverse is also true.   In the US lawyers move from one role to another. This is very good because you get to see both sides.  Each understands the other a lot more.  One of our former lawyers, Antonin Scalia, continues to serve as a Supreme Court Judge in the US. This is amazing and it’s excellent for us.

Bernard Amory, our Partner-in-Charge, worked for the Commission for years.  I think these opportunities can only contribute to making one a good lawyer.  Even being able to work as a “Stagaire” with the Commission or the European Parliament is a great experience.  I think it is always easier to work with authorities if you know them from the inside and if you have established good working relations.

BL:What do you see for your future career?

KF: My idea is to become a good lawyer, to continue to learn, and to improve my legal skills and knowledge. That said, life is unpredictable. So, I really don’t know. At this stage of my career, I don’t exclude anything.  Maybe when I am much older, I will even want to do something totally different from law.  As the saying goes, “Never say ‘never’“!

BL: Thank you for your time and best of luck to you.